Home plus, the Korean branch of Tesco, recently launched a series of virtual stores on subway platforms, enabling customers to make purchases using their smartphones while they wait for a train. During the campaign, Home plus online sales increased by 130%, with over 10,000 customers trying the stores.  trendwatching.com 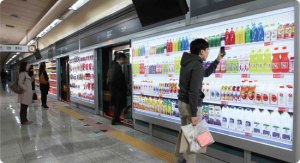