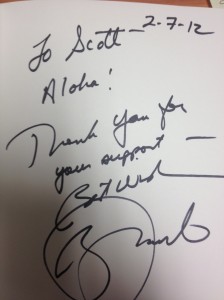 Yesterday-2-8-12 I had the pleasure of seeing and hearing Roy Firestone Speak at the HAB Luncheon at the Ala Moana Hotel, Hibiscus Ballroom.  Prior to seeing him speak, My friend from Work-Wade and I went over to meet him and purchase his book entitled “Don’t Make Me Cry”.  He was really friendly, chatted with us a bit, and signed my new book.

Next we had some of the best Mass Luncheon food I’ve ever tasted.  The meal consisted of a delicious Caesar Salad  with super good dressing, Chicken with tomato Parmigiano sauce, with delectable fried eggplant and a side of olive oil, butter and spinach spaghetti.. Oh Yeah, it was G-O-O-D!

Then Roy came on and spoke, what I liked best is how he incorporated both his own personality and various voices along with lots of fun clips from past interviews including the time he made Cuba Gooding Jr “Cry” in Jerry McGuire! Roy has won 7 Emmy Awards and has interviewed over 5,000 people. Much of the time it looks like he’s just winging it, but He told us point-blank that when he does an interview, he totally researches his subject and memorizes almost everything he can about him or her. Then he doesn’t pre prepare  questions, he writes down general words that he wants to cover in the interview.  And he didn’t say this-but I suspect he does write down some tips on how he will get the interview to become emotionally appealing. I doubt he tries to get them to cry, but I figure he does try to get them to open up emotionally for a more appealing interview for the TV audiences.

Roy actually made half of the room cry when he was talking to us. Most of the time he made us laugh, but during a really captivating story about a girl who fell down when she was running, then got up to finish the race and WON the race, half the room was in tears!

Some of the fun things and Highlights from his talk were:

1.  A Story about the time he met Wilt Chamberlin-Wilt was sitting in a luxury mobile wearing a bright suit, hat with a big long feather, fancy shoes, the whole works. Roy asked him “How Bout an interview sometime?” and Wilt responded by saying “Aaaah, not right now, I’m trying to keep a LOW Profile”.

2. The time he interviewed Shaq and asked him the difference between him and Kobe, and Shaq said “Kobe’s more of a loner and I’m more of a socialist”

3. He showed famed coach and broadcaster,  Hubie Brown talking about his father and this was extremely emotional-it was another time that the crowd went into tears-this time MORE than half the room. In Roy’s Book he mentions “When Hubie talked about his father, he went into a virtual trance, it was the most intensely emotional interview I’ve been part of”. and even the tape of this sent  more thanhalf the room into tears!

4. Many of the biggest stars have a lot in common-Competitive Greatness, Passion, and Preparedness. This included Jimmy V, John Wooden, Ali, and my favorite and Roy’s favorite running back of all time-The Great-“Sweetness”-Walter Payton.

And the last story he told was about M. Ali and how he had the ability to “uplift” practically anyone. Even though Ali had a huge ego and a loud mouth, he was quite passionate about others.  Roy Ended the session by letting us all know that we should all try to go out into our days, throughout  the world and our lives and try to uplift others. This included giving help and positivity to everyone-your waitress, the Janitor, the CEO, your co-worker and especially your Team-Mates!

All in all it was a good Hour or so spent at the Ala Moana Hotel.  When I get a chance I’ll read my new book and let you know more.  Have a nice weekend!

Today is the first Day of the “New Look” of Advertisinginhawaii.com, in honor of it, we aren’t going to do a blog about advertising.  Today is just a Blog listing the Newly announced NBA All-Star Starters for the NBA All Star Game on Sunday February 26, 2012.  I’m just making sure that posting posts and pictures works and I like the NBA All-Star Game a lot! I usually watch it 3-4 times on my DVR! Sorry-I don’t have pictures of players, all the player pix I nabbed from the net were “not allowed” to be uploaded on the blog, so we have a picture of one of Lebron’s shoes.  Anyways:  Here’s the 2012 NBA All-Star Starters!